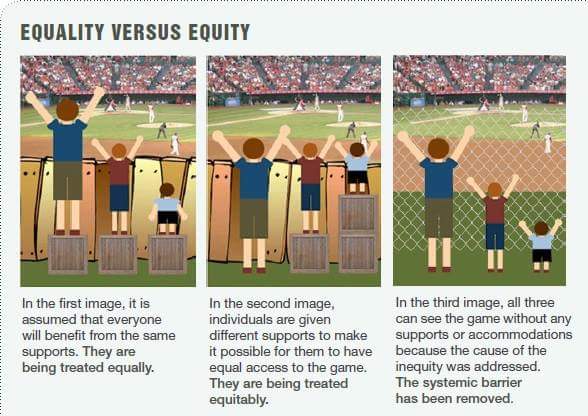 Previously, I’d only seen the first two panels and assumed it was the complete comic.

This version is much better.

ADDENDUM: As this approaches 100,000 notes as of this writing (less than three days after it was first posted), there are a couple of things that need to be added, and I prefer to add them to the original post, rather than to a reblog.

FIRST… there are a number of reblogs and replies–mostly from white males who see their precious capitalism threatened–that ignore the point of the comic and go after the fact that the people pictured didn’t pay for a ticket to get into the stadium.

If you need to see the point without the barrier (hah) of this particular comic, imagine this scenario instead. The scene is the maternity ward of a hospital. A joyful father is looking into the nursery window to see his newborn daughter…

Better? Everyone complaining about them watching the game “illegally” can now shut the fuck up.

SECOND… there have been a couple of inquiries about the source. Turns out, the original was indeed the first two panels only. It was an MS Paint image thrown
together by a business professor named Craig Froehle to illustrate the difference between
equality of opportunity and equality of outcomes. The three-panel version featuring the removal of the barrier is one of many adaptations.

For the somewhat fascinating story behind the original and how it came to be adapted in myriad ways, see https://medium.com/@CRA1G/the-evolution-of-an-accidental-meme-ddc4e139e0e4