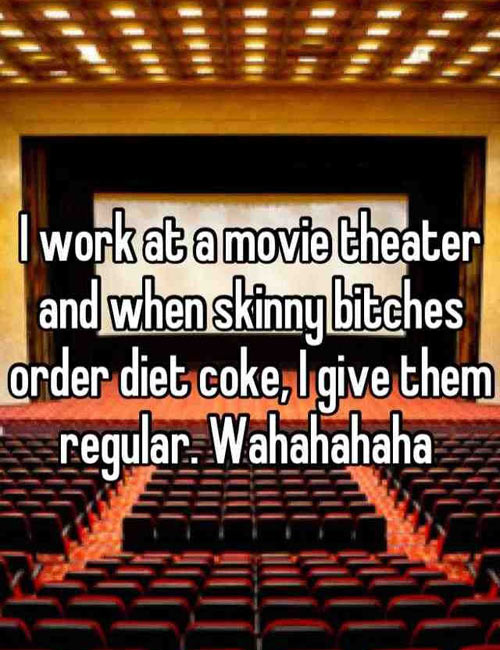 DO NOT DO THIS.

This makes me so angry.

If you work in a movie theater and you do this I have no respect for you.

My younger brother is Type 1 Diabetic.

When we go to a movie theater, we always get him diet soda. If he were to get regular when we asked for diet, we would not give him the insulin he would need for it. If that happens, his blood sugar level could go so high he could go into a coma, go blind, or even die.

If somebody gave him regular soda instead of diet without telling us, that person could be responsible for a nine-year-old being killed or blinded.

Just thinking about that makes me so angry. I get scared every time we take him to a movie in case the people working there saw this picture and decide to do the same thing.

This also applies to baristas

Fun story about the baristas doing this kind of shit.

I am very sensitive to lactose, not Lactose intolerant but because of stomach ulcers that are still healing. A couple years ago I went to Starbucks right after my classes with some friends and asked for a green tea latte with soy milk. The barista, for some reason out of malice and/or hate for her life so she took it out on me, gave me whole milk in my latte.

5 minutes after my first sip of latte, my stomach cramped BAD. Not the “Oh! time to poop!” kind of cramp but it felt like someone had stabbed me with a knife and twisted it. Now I’ve had this happen before so I knew the cause of it. I went up to the barista clutching my gut screaming at her that she put dairy in my latte rather than soy LIKE I REQUESTED. She denied it and called me a “pretentious white girl for wanting soy”and so my friends got the manager. I had to explain that I had stomach ulcers that were still healing and if I were to go to the hospital for this incident, they would be responsible for it.

Manager flipped his shit and the barista was terrified out of her mind. Pretty sure both thought i was gonna sue. Manager actually fired her on the spot because of the negligence. My friends managed to get me home in one piece while I stayed home for 3 days in absolute agony and missed my midterm.

So remember kiddies, if someone is asking for Diet or “Skinny” or “soy” or anything that is not regular, give them what they requested because it may not be them being healthy, but a dietary need that can possibly be life or death

also if they ARE trying to be healthy you should give it to them to!! Its not your decision to police or question others food choices!!!

also im lactose intolerant AND ive had stomach infections/ulcers so i feel this.

I have Celiac Disease, so I’m very gluten intolerant. When I go out to eat at restaurants a lot of people just assume that I asked for my food gluten free because of the gluten free diet fad (which is usually a bullshit diet btw).

Last month I went out to dinner with a friend at an italian restaurant that had a small gluten free menu. I had been there once before and had their gluten free pasta and it was great! I think one of the managers had been there and was super helpful when taking my order to make sure that everything was gluten free for me. When I ordered the gluten free pasta again this time though, the waitress who took my order all but rolled her eyes at me. I didn’t think much of it at the time, because the restaurant was so accommodating before, I just assumed it would be the same this time.

But sure enough, they brought out my pasta, I ate it, and about an hour later I had extreme stomach pains and was throwing up (in a movie theater no less).

Barfing and agonizing pain aside, eating gluten when you have celiac causes a lot of internal damage that’s hard to notice. The biggest thing is that it damages your intestines, preventing your body from absorbing nutrients properly, which can take months to heal.

So PLEASE, if you work at a restaurant or anything with food and someone asks for something a certain way, please listen to them and don’t just disregard someone’s order. It’s not funny and it can have serious consequences.

I will reblog this with every single story about someone getting sick because of an asshole giving them the opposite of what they ordered until it sinks in for everyone.

Recently on the news a 16 year old boy with a dairy allergy had gone to eat at IHOP with his family. The specifically asked if they could make dairy free pancakes and they said yes. Not too long after he had a reaction and was rushed to the hospital. This kid died because the was dairy in his pancakes that they asked for no dairy. His epi pen that his mother had wasn’t enough to help him. I know working in fast food or any job that’s serves food and beverage sucks but not as much as causing someone to get sick over negligence.

My youngest cousin – who is now five, he just started kindergarten – has Celiac’s disease. You would not BELEIVE the amount of times I’ve heard my aunt say she’s ordered something gluten free, only to watch the waiter or waitress’s eyes go huge when she gives it to my cousin – my cousin with the medical id band on his tiny five year old wrist proclaiming I HAVE CELIACS and have to take it back.

Shit like this could kill my cousin. Knock it the fuck off.

I cannot tolerate caffeine–it makes me have chest pain and a racing pulse, and also gives me horrible body pain, so I always ask for decaf if I order coffee when I’m out, and doublecheck with the waiter/ress when they bring it. but instead of saying “is this decaf like I asked for?” I always say “oh, did I remember to order decaf?” I shouldn’t have to act like I’m the forgetful one (because I know damn well I asked for decaf) but it seems to work better than implying that they screwed up when I take the blame on myself like that. and if there’s any hesitation when they answer, I tell them, “if there’s any doubt, please get another one, or just give me water–if this is regular, it’ll mess up my heart” and lots of times when I say that, they look alarmed and go change it or get another one.

but I shouldn’t HAVE to share my personal medical history with strangers just to get my order right! no one should! how is it their business? it makes me really uncomfortable to have to do that. JUST GIVE PEOPLE WHAT THEY ORDER!

I’ve reblogged this maaaany times before but there’s a few new stories on here so i’m doing it again.

cut this shit out

don’t be that kind of asshole.

Me and my family went to a restaurant a few years back and one of the dishes we ordered was made with wine vinegar, which I am allergic to, so we asked the waiter to skip it, and he said sure, no problem, that’s fine.

So my food gets to the table, and I start eating and then my throat closes and I can’t breathe and then I start coughing and throwing up right there in the middle of the restaurant and it was very fortunate that I was with my family and they knew what was happening to me.

I had to be rushed to the hospital, and admitted, and I came damn near close to having my throat cut open so I could breathe through a whole on my neck.

Because they put wine vinegar in my food when I explicitly told them not to, because they were assholes, and I could have died.

They probably didn’t mean to hurt me but they did. I missed class, and work, and, again, I COULD HAVE DIED.

So much all of this. Unless I’m at a Chinese restaurant, I always tell the waitstaff about my dairy allergy– because then there’s a 95% chance they’ll take me seriously. I’ve learned to read them, and check everything, and make sure to order things that are “easily” adjusted (there are certain places I don’t order a salad because the cheese is too close to the salad bin and they can’t seem to give me one without any). I’ve accepted that every time I go out to eat, I’m pretty much putting my life in other people’s hands. It sucks, and my friends and coworkers don’t always understand why I don’t find going out to eat a treat.

If I’m getting something small, though, like french fries (OMG, McDonald’s fries have beef tallow with milk in it though?), or a drink, I don’t usually tell them. Especially if it’s just a drink and a bag of chips and the ingredients on the chips are right there.

If I had trouble with sugar, though? I wouldn’t think much to say “I absolutely must have diet soda because I’m diabetic” because that shouldn’t be so hard to do right.

Always give people what they ordered. You don’t know why they’re asking.