we all have that movie we saw too young and probably scarred us for life.

I haven’t done one of these in a while and I saw @takethewatch do it a few days ago and thought I’d jump on the bandwagon.  ^_^  She did 9, but I was having trouble even narrowing it to 10, so I stopped trying.  As a side note, it amuses me to no end how many of these are from my favorite arboretum.  *snerts*

(Also, if you look closely, I snuck the scarf in there that I just finished.  ^_~  It’s being washed at the moment and once it’s done blocking/drying, I’ll post real pictures.  So, sometime tomorrow, maybe?)

This is an experiment to see if there really are as few of us as people think.You can also use this to freak out your followers who think you’re 25 or something. Yay!

Don’t be afraid of “adulthood”. Look how cool I am, kids! *vigorous jazz hands*

new tag meme: type “im the” and tag this with the first thing that comes up

like half the tags on this are “im the worst”…. guys…… is the cactus for straight ppl to choke on

Buzzfeed made a privilege test, I got a 13 and the highest I’ve seen this go was 78 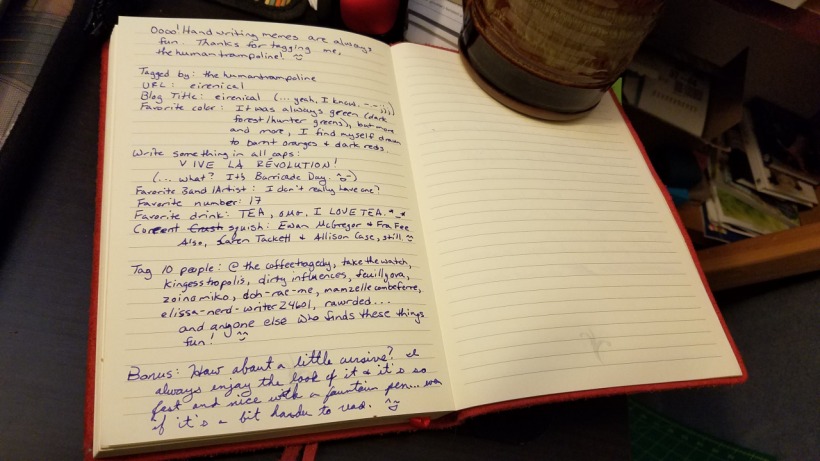 Oooo!  Handwriting memes are always fun.  Thanks for tagging me, thehumantrampoline!  ^_^

Bonus: How about a little cursive?  I always enjoy the look of it & it’s so fast and nice with a fountain pen… even it it’s a bit harder to read.  ;D

1:48 a.m and how I’m going to decorate my apartment next month

5:22 am and counting down how long until my fiancé comes home from work even though he just left

9:12 am and how the girl that I’m in love with is in the next room sleeping next to her girlfriend

11:12 am and how I have so much to do today before leaving for Louisiana, and how I’m excited to visit the New Orleans Marshalls store bc I’m a work nerd.

11:18 am. I’m thinking about getting a new job, where to apply, finishing this class and the other extension paper and how I have to take this proctored exam on a campus I know nothing about before the 23rd. Also annotated bibliography. Also cleaning and organizing. Also mac and cheese. Yeah.

10:28 PM thinking about Elf and Dwarf smooching, and also that I’m tired, and I need to do concept art and designs tomorrow maybe, and also finish roughing out comic pages.

11:33 pm. Ow, my fingers hurt. I’m digging the flower headband but I think they might be custom order. Perfect for proms, weddings, and Beltine…

11.33 – my headache and how time-consuming it is these days to book a flight.

09:22 and writing drabble while enjoying a day off

4:43 and wondering how someone could NOT be awake right now and reading this.

16:20 and how is it I’m the writer in a house with 3 Very Science Minded People, but I’m the one who figured out what’s busted on the new side table drawer (and how do I get out of this conversation so I can get back to writing)?

17:28, there’s a photoset project I need to work on, prompts I need to finish, dishes to put away and more to clean, I need to skip this song, is dad home from work yet?, everything is too much and I need my brain to slow down damnit. *takes a breath*

8:20 AM Just found a bug bite on my right middle toe and it itches A LOT. Also I want pancakes. Anyone want to come make some for me? *hopeful look* ^_^

wow. what a superpower.

DNA REPLICATION WOAH THAT IS A COOL POWER

HOLY SHIT I CAN TURN MY PROJECTILES INTO ANYTHING.

SWORDS, DAGGERS, FUCKING FISTS. HOLY SHIT THERE IS NO END–

basically, fuck all your powers ❤

User are be able to command a certain domain, a sphere of influence, meaning they are able to command certain concepts that range from elements, energies, universal forces, or aspects of sentient life (such as War, Wisdom, Law, etc).

This power is the reason why Mortals feared/worshiped Deities of Mythology: the Deities maintained worldly balance and ensured the safety,prosperity and development of whatever civilization worshiped them.

Basically, I am a god.

Hmmm, my power vs yours… I wonder what would happen

My power is that I can DIE.

Love Empowement. I can draw strength and abilities from… Being loved? Loving? Just having love generally around me? Who cares it’s ALREADY MY POWER~

I GET TO BABBLE ABOUT MUET???  😀  YESSSSSSSS.  I’M SO GLAD YOU ASKED THIS QUESTION FOR THIS STORY, BECAUSE I ACTUALLY HAVE AN ANSWER FOR IT.  *_*  (Seriously, I actually have given this a lot of thought, off and on, over writing this story.  ^_^)

(If anyone else would like to send me questions, here they are! ^_^)

(And if anyone would like to read the story, I’ll link to the chapter one tumblr post, because all the warning are there and I AM NOT FUCKING AROUND, this story is not for everyone – those warning are there for a reason.  So.  Consider yourself warned.  ^_~)

1:What inspired you to write the fic this way?

OK, so since @takethewatch and I were just talking about fic archaeology earlier, to answer this question the first thing you need to know about this story is how it started.  And that question actually has two answers.  The first lies here.  @luchia13 and I had done this little writing exercise to kind of get each other writing again.  We had someone volunteer a trope, then we were going to write 1500 words each on that trope, swap, and finish each other’s stories.  Only we both fell enough in love with our own stories that we just kind of kept them.

The trope was fake boyfriends.

Anyway, the second answer to how this fic started was that I had had a really, REALLY fucked up fic dream a few weeks prior to that.  And it was basically about the dystopian society described in Muet… and what happens to Courfeyrac at the hands of Montparnasse.  And as is usually the case with dreams like that, I didn’t expect it EVER to see the light of day as an actual written fic.  But when we took off on this little writerly challenge… that fucking story just wouldn’t take a hint.  It wanted to get written and it was NOT letting me off the hook.  And since, for the first time in a long time, my writing wasn’t fighting me, I didn’t even question it.  I just said “fuck it” and let it happen.  Because when a fic is fighting that hard to get out of my brain and onto paper… it’s usually because some part of me really, really needs it to.

So, in short, this story came from a really, REALLY dark place in my psyche, a large part of which was prompted by too many people jumping on top of me and trying to get me to do things “for my own good” whether I wanted to or not.  And most often the answer was “not” but I’d feel obligated to do the thing anyway because they meant well and I loved them, right?  And that thinking was just shoving me ever deeper into this spiral of bad feelings and shame and guilt and just–  I needed to work that shit out somehow.  So I took it to an extreme and dumped it on Courfeyrac so I could work it out through him. And the story evolved from there.

And given the amount of worldbuilding that went into this story and how dark and dystopian it really was, the picture of it in my head was very film noir.  And that dark, foreboding, closed in feel is very present in my head whenever I think about the story and that seems to translate onto paper when I write for it.  ^_^

(Also tagging @kingesstropolis in this because it is relevant to your interests, I believe.  ^_~)