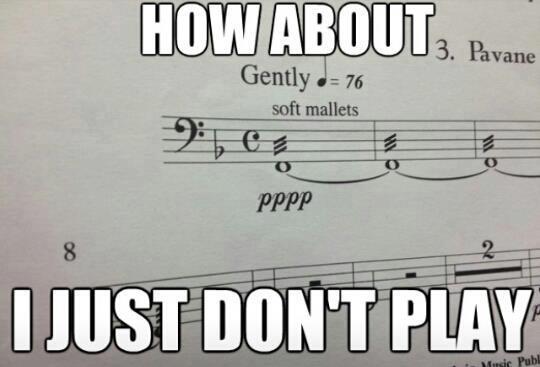 Fun Story: My director kept telling me and my tenor sax buddy to play softer. No matter what we did, it wasn’t soft enough for him. So getting frustrated, I told my buddy “Dont play this time. Just fake it”

Our Band Director then informed us we sounded perfect.

On the contrast, “f” means loud, and “ffff” probably means so loud you go unconscious.

Me and my trombone buddies had “ffff” and he sat next to me and played so hard that he fell out of his chair.

The lengths we go for music.

Okay yeah so I play the bass clarinet and the amount of air you have to move and the stiffness of the reed means it only has two settings and that is loud and louder, with an optional LOUDEST that includes a 50% probability of HORRIBLE CROAKING NOISE which is the bass equivalent of the ubiquitous clarinet shriek.

One day, when I was in concert band in high school, we got a new piece handed out for the first time, and there was a strange little commotion back in the tuba section — whispering, and pointing at something in the music, and swatting at each other’s hands all shhh don’t call attention to it. And although they did attract the attention of basically everyone else in the band, they managed to avoid being noticed by the band director, who gave us a few minutes to look over our parts and then said, “All right, let’s run through it up to section A.”

And here we are, cheerfully playing along, sounding reasonably competent — but everyone, when they have the attention to spare, is keeping an eye on the tuba players. They don’t come in for the first eight measures or so, and then when they do come in, what we see is:

The entire band stops dead, in the cacophonous kind of way that a band stops when it hasn’t actually been cued to stop. The band director doesn’t even say anything, just looks straight back at the tubas and makes a helpless sort of why gesture.

In unison, the tuba players defend themselves: “THERE WERE FOUR F’S.”

FFFF is not really a rational dynamic marking for any instrument, but for the love of all that is holy why would you put it in a tuba part.

Everyone else go home

Oh man, so I play trombone, and we got this piece called Florentiner Marsch by Julius Fucik, and we saw this which is 8 fortes. We were shocked until, that is 24 fortes who the fuck does that

This guy. Take a good look – that is the moustache of a man with nothing to lose.