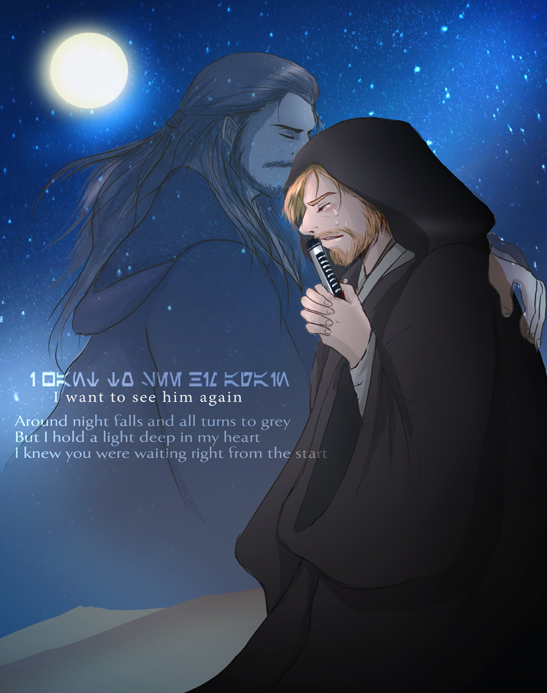 Wish Upon a Star

July 7,  at the Star Festival.

27. Things you said through a closed door

There’s no sound but the shuffling of his feet on the uneven wood floor of the hallway.  He tries again.

“You meant it.”  Courfeyrac’s voice is stretched thin and uneven.

“I didn’t mean your family.  Courfeyrac.”

“Combeferre, go away.  I don’t want you here right now.”

Combeferre has never been able to read people well, but even he knows that this is Courfeyrac’s serious voice.  And yet.  He can’t bear to walk away, to leave things be when they are so terribly Wrong.  Not when it’s Courfeyrac on the other side of that door.  “I’m sorry,” he tries.  “It was rude and unthinking of me.  I didn’t–I’m not like you, Courf, I’m not good with people.”

The door is wrenched open, and Courfeyrac is there.  His eyes are wet but Combeferre knows he’s not really crying–he’s just angry.  (He knows him that well, God, he knows him so well, how is it that there is one person in the whole world who he actually gets and he’s still managed to hurt him?)

“I’ve heard that–that cowardly excuse from you too many times,” Courfeyrac snaps.  “It’s not good enough, Combeferre.  There’s a difference between being awkward, and being cruel, and you like to pretend you don’t see it.”

Combeferre ducks his head, heat rising to his cheeks.  Courfeyrac runs on, flinging out the words with frighteningly precise ennunciation, even as his tongue’s going a mile a minute.  “It doesn’t take any kind of social acumen to recognize when something you want to say might hurt someone–it just takes a little bit of logic and enough caring to actually stop and think about the facts.”

It’s not true, Combeferre’s brain protests–and yet it’s where all the facts are pointing.  Given what’s gone down this evening, the logical conclusion is that Combeferre is a selfish bastard who likes people only for how they benefit him and doesn’t actually give a shit about Courfeyrac’s feelings.

And Combeferre is a slave to logic.

He turns away, and the door slams behind him and he can still hear Courfeyrac’s restless pacing around the room.  And he knows Courfeyrac well enough to know to text Joly with the suggestion he and Bossuet drop by to channel Courfeyrac’s angry energy into something less destructive than what he’ll come up with on his own.  He’s sent the text and received an affirmative reply (bless Joly, he doesn’t ask what happened), and has already let himself out of the apartment before he realizes that he’s once again proved that he knows Courfeyrac so well.

He really has no excuse.

As he turns up his collar against the cold, spitting rain that feels more like November than April, it occurs to him that he might also be being a little overdramatic, about the whole thing.  He said something shitty; now, twenty minutes later, he’s come to the conclusion that he’s an inhuman wretch with a rotted-out soul who’s probably going to die alone and deserve it.  It pains him to realize that that part of his personality is a fairly recent grafting, courtesy of Courfeyrac.

Yes, but the point is: which one hurts us more?

Luke the Jedi, strong in his conquered suffering, carrying the lifeless body of a man who was once prone to striding as proudly as Luke does now, strong and untouchable, but is now brought low and helpless by a final act of love. A stoic hero holding up a spent sacrificial victim.

Luke the boy, recently tortured within an inch of his life, dragging a weight too heavy for him, but still struggling on with all the painful determination of a lonely child who’ll do anything to hold on to the dying father he has finally truly found again.

the devil and god are at war inside (insp.)

Okay, so I saw a post saying Lin-Manuel Miranda said ‘The Story of Tonight’ was based on Les Amis… so this happened.