It’s nearing midnight, probably, and Feuilly has been dozing on Enjolras’ shoulder, book long abandoned in his lap, for a good hour when Enjolras looks up from his own studies, blue eyes twinkling.

“You should go to bed,” he wraps an arm around Feuilly, trying to gently shake him awake. “You’ll hurt your neck and you’ll be exhausted tomorrow.”

“But y’hair smells good,” he mumbles, moving a little so he can settle more comfortably against Enjolras’ side. “’n it’s soft.”

Alright then, Enjolras smiles, and turns back to his book.

A revolutionary’s life is full of the unknown
will I live to see our triumph
are we acting in the proper way at the proper time
what exactly is up with my friend’s hair, is that even a thing hair can do

(I don’t draw anything ever and then this, why does anyone follow me
also Tumblr what are you even doing with my colors) 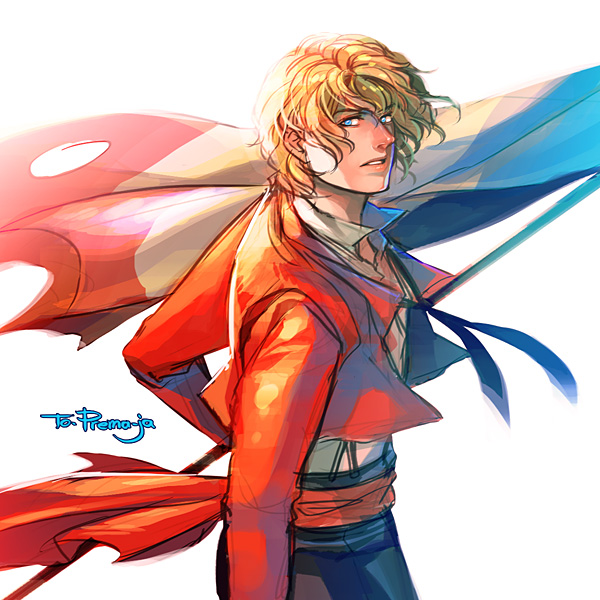 Oh wow, the lighting on this is GORGEOUS. And his expression is perfect!

I’ll let Enjolras answer that question for me, directly from the book:

Listen, my friend, Feuilly, valiant workingman, man of the people, man of all peoples. I venerate you. Yes, you clearly see future ages; you are right. You knew neither a father nor a mother, Feuilly; you have adopted humanity for your mother, and right for your father. You are going to die here, that is, to triumph.

y’all know how i never shut up about this pairing. like, I have a Huge soft spot for their romantic relationship, partly because I think a lot of people avoid writing it for imo pretty weak reasons, but also their friendship. it is so important to me.

I love all the romantic comedies cliches for them – especially the ‘we married for insurance/school/other reasons, but now we’re kinda a thing I don’t know how it happened but I’m so happy’

and when their friends realise they’re actually really in love with each other – when did that happen? – they throw them a new, more romantic ‘ceremony’, which is totally not something Enjolras and Feuilly would have thought about doing but it ends up being a lot of fun.

really, they have such fantastic slow burn, crushes-to-friends-to-lovers potential.

“Open
your baskets!  The ingredients you must use in your dish are…”

Enjolras
sets the remote control on the coffee table, next to an empty pint of
Ben & Jerry’s and two spoons resting on the upturned ice cream
lid.  Chopped is a show that they can both agree on; Enjolras likes
to learn new tricks he can use in the kitchen (he really is
getting better at cooking, he insists as Courfeyrac teases him),
while Courfeyrac enjoys most any kind of reality competition show.

The
two of them had been sitting together on the couch, with Courfeyrac’s
head on Enjolras’s shoulder.  When Enjolras sits back again after
setting down the remote, Courfeyrac leans against him and rests his
head where it had been before, snuggling close to him.  Enjolras’s
hand comes to rest on top of Courfeyrac’s, and he rubs his thumb
gently against the back of his friend’s hand.

After
a moment, Courfeyrac lifts his head.  Enjolras looks over at him,
curious, and the look on Courfeyrac’s face is not one he recognizes.
Courfeyrac takes a deep breath.

“Yes?”
Enjolras is even more curious now.  Courfeyrac’s tone of voice
doesn’t worry him, exactly, but it makes him feel uncertain.

The
next few words sound as cautious as Enjolras feels.  “What are we?”

Enjolras
definitely looks confused.  But Courfeyrac barely gives him time to
think before backpedalling.  “Scratch that.  Don’t answer that.
I’m sorry.”  His hand stiffens under Enjolras’s, and he looks down
at it, then back up at Enjolras, as if to ask if this was still okay.

Enjolras
smiles that gentle smile of his, the one that warms something in
Courfeyrac’s chest, and squeezes his hand.  “It’s all right.”

Courfeyrac
shakes his head.  “No, I’m sorry.  It’s just I’ve never done
anything like this before.  I don’t really do the romance thing, and
I know you’ve said you don’t either, but it’s—.”

Enjolras
leans in quickly to kiss Courfeyrac on the cheek.  It works as he
intended, and Courfeyrac cuts himself off mid-sentence.  “It’s
really all right.  Honestly, I don’t have a word for this either.
But… that’s fine, yeah?”

Courfeyrac’s
eyebrows flash up for a brief moment, then sighs with relief.  “Yeah.
Yeah, that’s fine.”

Enjolras
nestles back into the couch and pats his shoulder.  “Come on, the
judging’s about to start.”

Courfeyrac
laughs and flops back down, his head finding Enjolras’s shoulder as
his hand reaches for his friend’s hand.

Yessssssssssss.  ^____________^  OK, so we’ve discussed this many times before but Enjolras/Feuilly is definitely a ‘10′ ship for me (maybe an ‘11′ by now?  XD).  ^_^  They’re just too adorable because they respect and admire each other SO MUCH and can you imagine how good they’d be for each other?  I mean, they both suck at self-care because they get too wrapped up in their causes, but they’d be SO GOOD at taking care of each other.  *_*

But it took them a long time to get there.

They have such a slow courtship.  Seriously.  SO. SLOW.

When they first met, Feuilly was very closed off emotionally.  He was passionate, sure, but he didn’t open up about himself much.  He was quick to take up a cause, but slow to let anyone else in.  He’d lost too much in his life and he’d been hurt too often and it had turned him shy of making new friendships.  And he’d been so focused on getting out and doing better for himself that romance just never seemed to be in the cards.

Enjolras, OTOH, was an open book… he’d just never really thought about dating much.
There were always other things
which took precedence – school, friends, injustice.  Who had time for
romance, right?

If pressed he’d have
said that he was asexual and aromantic, since a history of a lack of interest must mean something, right?

(More behind the cut because this is getting long and turning into a mini-fic, good grief. O_o;;;)

When Enjolras and Feuilly first meet, they admire each other from a distance.  Feuilly respects Enjolras, looks up to him as a leader and upperclassman, but he’s learned that someone who looks that good from a distance hardly ever is from close up.  So, he’s afraid to get too close, even if he can’t deny that there’s something compelling about Enjolras, especially when he’s all riled up from speechmaking.

As for Enjolras, he’s absolutely floored by Feuilly’s passion and his willingness to do whatever it takes to help out, no matter how much else he has on his plate.  But every time he tries to talk to him, he ends up tripping over his tongue in the worst possible ways.  (Seriously, it’s SO PAINFULLY AWKWARD – think Shang in Mulan “…you fight good.” level of awkward.  SO. AWKWARD.)  Every bit of his eloquence deserts him.

What Enjolras doesn’t know, however, is that every single time he trips over himself trying to talk to Feuilly… Feuilly gets that much more comfortable around him.  Because, hey look, he’s not perfect.  He messes up.  He blushes.  One time he even squeaked, he was so embarrassed.  (Combeferre heard about that one in great detail later.  From both of them.  And both had their faces buried in their hands when they relayed the story, and related it in equally high pitched tones… just for entirely different reasons.  He found it hilarious.)

It takes them over a year before they can manage a full conversation that consists of more than “Hello!” and “Great speech!” and “OK, bye!”  But once that ice is broken, it is BROKEN.  They find that they more interests in common than they ever would have guessed.  They eventually start staying after meetings for hours, often closing out the bar in their zeal for conversation.  Two years after their first meeting, they’re as comfortable with each other as it’s possible for two people to be with each other.  They’re each other’s first phone call when they’re in trouble, or when they have good news, or when they’re upset… or when they wake up in the morning.

And Enjolras, who never had time or interest in romance or sex, and Feuilly who was too angry and bitter to even contemplate it… find their opinions changing.  Glances linger just a little longer.  Touches become a little more intimate.  Smiles soften just a hair.  And five years after their first meeting when people start assuming that they’re dating… they simply smile and don’t bother to correct them.