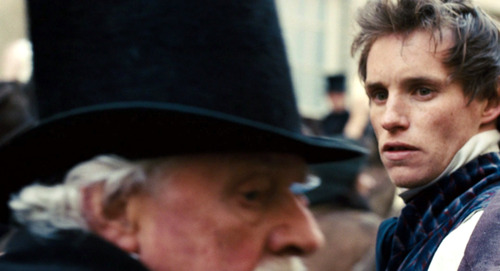 Okay so I want to post about a thing that seems to get overlooked a lot: Marius has a fairly dismal childhood himself!  He’s looked after and educated and so on, yes.  But he’s extremely isolated, and M. Gillenormand is a terrible parent. He’s not Thenardiers-level horrific, of course, but he is emotionally and verbally abusive to the point where, while the reader understands that he secretly loves Marius, Marius is in his twenties before he has any inkling of this.

And this is where a lot of Marius’s fail stems from – he’s a sheltered teenager who literally doesn’t know what healthy relationships look like.

Obviously I’m not gonna change any dedicated anti-Pontmercy minds here, and that’s not really my goal – but I do think this is an important aspect of his character that a lot of fandom doesn’t take into account. Also I should emphasize that a lot of this meta does not originate with me but with manypalimpsests, who has all the clevers but does not have way too much time on her hands.

please. stop praying for my grandpa!!!! you are making him too strong. he broke out of the hospital and the cops cant get him. he’s too powerful