oh, it REALLY is

like, everyone knows Combeferre is ridiculously knowledgeable about everything. And of COURSE Grantaire can do quotes and citations from every book and article he’s read since he was 12, it’s kinda spooky.

But everyone forgets about Bossuet. Everyone forgets he can and does  engage everybody in conversation all the time about whatever they’re into, he’s an easygoing guy, he lets other people go on about their interests, and he listens, and he remembers, and now he’s kicking everyone’s ass at this game by your powers combined.

They’re doing it in teams, and somehow they all end up on the same side. It’s a bloodbath.

it happened once. ONLY ONCE. Now they are Not Allowed to be on the same team, and also they have to have on their team at least one (1) of the following players, for balance : Enjolras, Feuilly, Marius, or Joly* (who are of course all terrifyingly smart, but with a much narrower focus of interests than the game really rewards)

Also, following the Great Boardgame Bloodbath of 1829, Joly and Bossuet are Not Allowed to be on the same team, in any game, ever.

*Joly WOULD have a much wider range of interests, but : Med School. He weeps for all the popular entertainment he’s not having time for these days. Musichetta : Be careful with your diet, love, bad cholesterol runs in the family

Grantaire : Why does that matter? I’m adopted!

Bossuet, slamming his fist against the fridge : What? Oh my God! Who told you?

Grantaire: Bossuet, I’m older than you.. 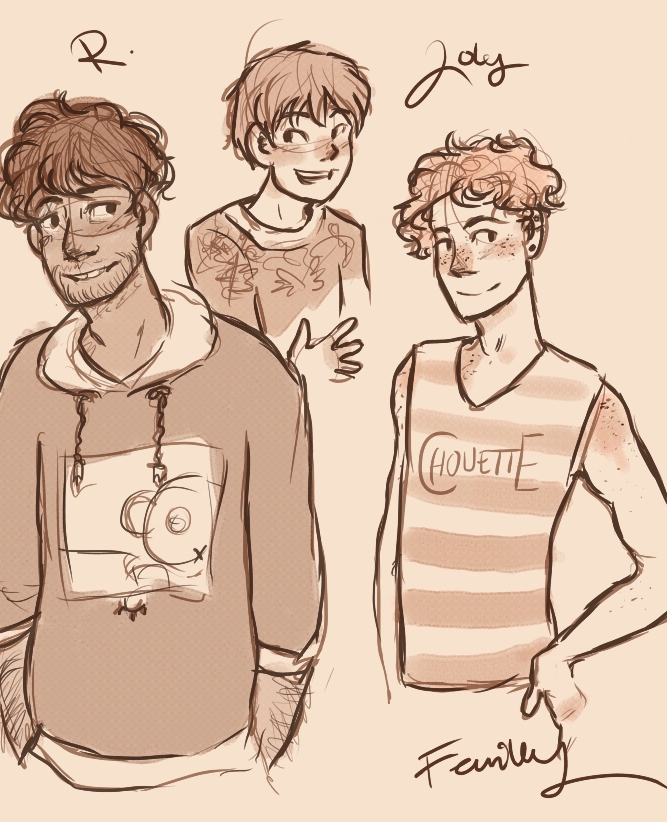 rays of light peeked
through the gap in the curtains to illuminate the face
of the man who was more accustomed to moonlight than the early summer
sun. he grunted and pulled the duvet covers over his head, only to
pull them down again a moment later as the smell of freshly brewed
coffee floated in from the open door. grantaire, bleary-eyed and
yawning, made his way to the kitchen. it was cool and calm in the early morning haze and coffee and paint stains adorned the vintage worktops. grantaire smiled softly as combeferre
kissed him good morning – combeferre never did mind grantaire’s
early morning stubble. grantaire rest his head on combeferre’s
shoulder and combeferre wrapped his arms around his boyfriend’s waist
in return, cuddling him tightly.

OKAY GUYS I feel like we don’t acknowledge enough that one line Grantaire says! I mean besides all the other lines that Grantaire says! The one that comes right after “I understand only love and liberty” remember that line (my favorite line)???
Yeah after that is my SECOND favorite line: “Never having had any money, I never got used to it, and therefore I’ve never felt the need of it; but if I’d been rich, there would have been no more poor!” THAT LINE.
He’s drunk here and still thinks of how he would help people if only he’d been in the position.
And it’s so interesting to me because Grantaire is speaking of how if he had the chance he would help, but meanwhile there is an actual barricade there with an actual hopeful revolution occurring. And he is not helping.
Enjolras and the other amis have their method of doing things, which is to demand more from the government. But GRANTAIRE (my beautiful son) doesn’t think that way. He doesn’t think going to the government will get them anywhere. He would go directly to the people suffering from the problem and help them with what he has, personally.
He’s surrounded by a bunch of rich schoolboys who have the money to help the poor directly (and also gain their devotion and to raise spirits) but who instead reject the money and challenge a powerful government. But he speaks of how if he was in their economic position he would do something guaranteed to help.
And this is from someone who says he “never (…) had any money” so he probably knows better than them how it feels to be like the rest of society, hardly making it through.
Idk man, this is my son and I love him.

This was in the tags, so I decided to go ahead a comment on this post.
Because I don’t think this way about the situation at all.

Grantaire is a sh*ttalker. That’s his thing (apart from literally 2-3 lines in all of his appearances in the book), and nothing he says should be taken at face value.
Sure, Grantaire seem to be favouring the theory of Valjean’s way of helping. And yes, helping the occasional citizen may help that citizen through the day, but what about the rest of their life? They’ll still die poor, powerless, subject to the whims of another King. Never masters of their own life.
Grantaire is thinking he is being theoretically kind, but he is but prolonging the status quo. Charity is never the way forward.

But even beyond that, he is not talking about being in the Amis’ economic position, because he is in their economic position – he is a wealthy bourgeois student, who can afford drinking and gambling through the day, and then wake up in his nice furnished apartment, with his nice clothes, to do more of the same on the next day. He knows every day from where his next meal is coming.
He’s talking about yet another fantasy, a Rotschilds-like fortune, basically something like ‘If I was King’.

From what we see of Grantaire, it’s all either a swollen-head self-aggrandizement, or meek fake-modesty. I think this is an instance of the latter.

Grantaire is troubled by society, and I am certain, and have always been certain, while reading the brick, that he has a good heart––but he does absolutely nothing, in the course of the brick, that puts him on a moral pedestal above the rest of the amis.  Far from it.  “Shittalker” sums it up.

It is TOTALLY shittalking. Well-meant and hopeful bluster, but bluster all the same.

FWIW it’s worth, I don’t think it’s either false modesty or self-aggrandizement, though. I think it’s fear.

Grantaire’s “if I won the lottery” style lamenting here is like Gillenormand’s complaining that if HE were rich, he’d have SO many young mistresses, totally, you don’t even know.  Gillenormand IS rich, incredibly rich!  The reason he can’t have young mistresses is totally unrelated to that! But it’s face-saving to blame it on money.   Grantaire is, at the least, solidly middle-class– he COULD give to charity, or toss money to beggars in the street. Heck, he probably even does, when he thinks of it.  But his conviction that he can’t *really* change anything has nothing to do with money.