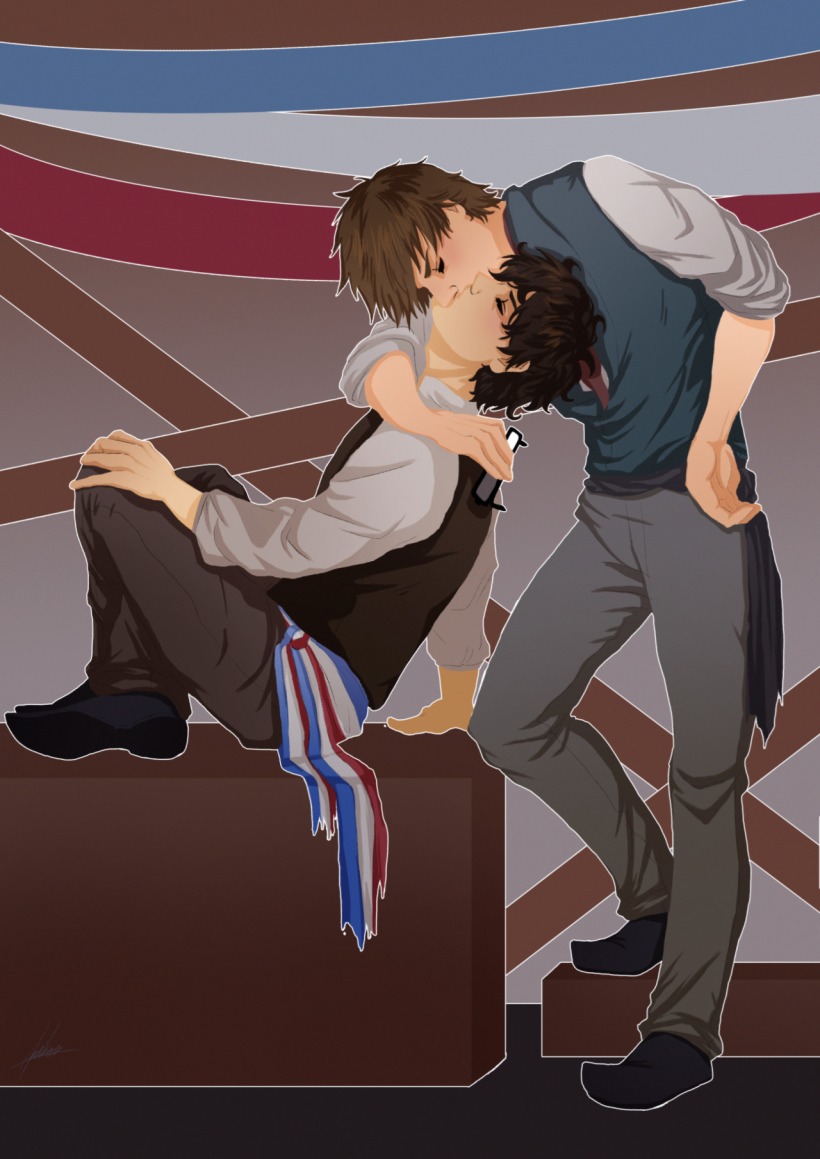 so @grand-duc​ hit what is possibly my FAVORITE THING about the “Mace Windu unfucks the timeline” concept with the following tags: #ESPECIALLY IF AFTER TPM MACE GOES #“SHIT #I’M THE PARENTAL FIGURE OF A YOUNGLING #A VERY FRAGILE YOUNGLING #THAT I HAVE TO TREAT CAREFULLY AND NOT NECESSARILY IN A TRADITIONAL JEDI MANNER #KNOWING THE FUTURE IS ONE THING #KNOWING HOW TO UNFUCK THE FUTURE IS ANOTHER

because YES, Anakin Skywalker absolutely CANNOT BE RAISED LIKE A NORMAL JEDI. He remembers his mother! He LOVES his mother! He has crisis-forged emotional attachments to people who know NOTHING about the Force or the Jedi code, and he knows absolutely nothing about life in the temple while simultaneously knowing a FUCKTON more about life outside it than a normal nine year-old would be expected to handle. He has pride and fear and DRASTICALLY SKEWED EMOTIONAL NEEDS, compared to what any traditionally-educated crechemaster or instructor is used to handling in their typical baby Jedi.

(and yeah we gotta read-more this one, I guess, sorry mobile users :X)

Alright guys. Here it is. The thing I’ve been working on for the past three weeks: a sweet mashup trailer for the Prequel Trilogy using the music from the trailer for The Force Awakens – finished just in time for the film’s release. Well, almost. The goal I set for myself was to create a trailer that showed that the Prequels could be just as compelling as the other films in the saga. I’m incredibly proud of it and hope it’s successful in highlighting what I feel were the best parts of the Prequel Trilogy.

going off my tags on this post; the prequels emphasizing anakin’s love for padme as the tipping point for his fall to the dark side doesn’t, i think, make his intrinsic humanity his ultimate flaw or his passion/love, which a lot of people have critiqued the prequels for doing— and, true, the acting/script in the prequels isn’t strong enough to emphasize anything beyond this, essentially.  but i think what the anakin/padme romance actually does, and what if i want to give lucasfilm credit for the films are actually trying to do, is give further and essential strength to anakin’s final choice to murder palpatine and save luke.  because anakin’s love for padme isn’t what turns him into a sith— palpatine is.  when anakin believes padme is going to die, he doesn’t tell padme (who not only is, you know, the subject of discussion here, but has throughout the story been an avatar of calm rationality), he doesn’t tell obi-wan (who he loves probably in equality to padme and is his connection to the jedi and the force and those who actually want to help him), he tells palpatine.  and what’s essential about that choice is that anakin’s arc is all about deference.

anakin as a child is a slave.  he’s immediately dragged to the jedi (told he’s too old to be a jedi! rejected by the people who saved him! only allowed to be trained because qui gon was killed by a sith and demanded obi wan— first sithkiller in a thousand years— train him as his dying wish) and told that a) he is possibly the most powerful being in the universe b) as the most powerful being in the universe, he should shut up and listen to some people he’s never met about how to use that power and how someone that powerful should live their life.  the jedi council is very consciously i think depicted as what we would think of as an organized religion, only one where the deity empirically exists (think the catholic church if saints and prophets had laser swords).  the council have some good ideas about how to use the power of the force, how jedi should live their lives, how they should act and interact, but to take essentially the messiah— a messiah who has been a slave for nine years, ripped away from and told he must never see again the person he loves most in the world, and who is already a roiling mass of anger and pain— and tell him that he should live a completely ascetic life is just asking for it.  and indeed, the first thing anakin does when he’s given a solo mission is act like a ridiculously powerful nineteen year old boy and go after his boyhood crush.  (and then slaughter the people who hurt his mom.)  palpatine’s not an idiot.  palpatine’s probably the smartest man in the galaxy.  palpatine sees that this ridiculously powerful child is being told he can’t have feelings by the people he most looks up to and cares about in his life.

and so palpatine sweeps in and tells him not only that feelings are great and important but most essentially that palpatine is always there for him if he needs to have feelings.  palpatine plants himself as the one person in anakin’s life he can actually be a human being around.  not the jedi, who saved him, because they’ll tell him he’s not a good person.  not obi-wan, who he most looked up to, because obi-wan will chastise him.  (whether or not obi-wan would actually have given him a tonguelashing over caring about people is debatable (see: obi-wan, crying over qui-gon’s corpse; obi-wan, biggest flirt in the galaxy; obi-wan, ‘you were my brother, anakin, i loved you’) but anakin never dares ask because obi-wan is, in his eyes, ultimately first and foremost a jedi and a mouthpiece for the council), not padme, who he loves enough to tank the republic, because she’s too reasonable and wouldn’t know the way anakin does the way people can betray and humiliate you.  palpatine is the only one around whom anakin can be himself.  and by placing himself in that position palpatine makes himself anakin’s ultimate master, before anakin even knows he’s anything but a politician.  so of course he runs to palpatine with the fear of padme’s death.  of course he doesn’t make the “right” choice.  he can’t trust anyone else, because they’ll kick him out of the jedi, out of his marriage, out of all of he knows and loves and all the way back to watto and jabba.  (obviously they probably would not do this. but anakin has been systematically conditioned through circumstance to think this way.  anakin’s story is high tragedy, where situations pile up to the point that, through one mistake, he topples a whole society.  oops.)

anakin makes the wrong choice.  anakin doesn’t love padme too much.  anakin isn’t too little of a jedi.  anakin isn’t ultimately too selfish.  anakin doesn’t stand up for himself.  passionate, angry, idealistic, firestorm anakin was never told by anyone that it was okay to make his own choices, or that what he thought was as important as what other people thought.  anakin loves padme so much he breaks the jedi code to marry her, and then never tells anybody about it because he’s terrified of the council.  anakin loves qui-gon and obi-wan so much that he agrees to leave his mother, and then never goes back for her because he’s told she’s an attachment he has to let go of.  anakin feels so guilty about never going back for her (despite, see above, being conditioned to not make his own choices) that he slaughters an entire innocent village.  anakin begins the prequels saying that he’s going to free every slave, and then ends up being ‘held on a leash’ by tarkin.  anakin thinks the woman he loves is going to die— what’s he to do?   he’s not allowed to have married her. he can’t trust the people he loves.  so of course he runs to the sith.  the sith proclaim to be about selfishness, about power, and ultimately, about freedom— but the sith, too, are run on a system of masters and servants.  anakin lives in a universe that has been shaped— with lots of help from palpatine, who’s the only person who comes out on top in this, of course— to tell him that he’s not only not allowed to make his own choices, but even thinking them will harm him and the people he loves.  and so anakin chooses the only thing he thinks he can.  the only thing that will actually save padme.  anakin chooses the sith.  and anakin becomes even more chained than before.

and this inability to choose for himself, to try to find the right among all the things that have been (fairly literally) beaten into him, continues through the original trilogy— in anh, he’s completely under the thumb of tarkin despite demonstrably being able to murder anyone in the room with a thought.  in esb, when he’s told about luke, his first instinct is that they ‘rule the galaxy as father and son’, and when luke says no, he goes running back to palpatine.  anakin doesn’t even consider throwing over palpatine himself until palpatine attacks luke— he brings luke to palpatine to be his new apprentice.  luke’s existence isn’t enough.  padme’s death isn’t enough.  the fall of the jedi isn’t enough.  becoming palpatine’s pet isn’t enough.  what is the only thing that allows anakin to finally make an independent choice?

“father, please”.  his son— his untrained child— the only thing left of padme, who he failed, of obi-wan, who he betrayed, of himself, when he cared about something— is completely and utterly helpless, and the one man anakin thought cared about him is going to murder him, painfully, in front of his eyes.  luke is given the same choice as anakin— the people you love will die, your society will be despotic and inhumane, you will be betrayed by your family and friends, you will lose everything— and luke says, “father, please”.  luke not only demonstrates to anakin what it is to make his own choices, luke also demonstrates what it is to willingly trust someone else with your love and your life in the most dire of circumstances.  and in doing so, luke willingly hands anakin the reins.  and anakin looks between the man who’s held those reins for twenty years and the man who is looking at him saying ‘i love you enough to let you choose’, and finally gets to actually make a choice.  in these circumstances, that choice is easy.