courfeyrac and enjolras holding hands is the most pure

i always feel a little iffy about fandom using ‘hard-working’ as Feuilly’s main quality – usually in sortings or ‘les amis as … ‘ posts, ‘cause…

okay, it’s not that he’s not hard-working, because he is! he does so much! and it’s a good quality! but with Feuilly it’s in large part because he has to, because really for him there’s no other choice.

it might work for other characters (no one ever calls Enjolras or Combeferre hardworking when they most definitely are? I wonder why – except no, I know why) saying the main thing about Feuilly is that he’s gounded and hard-working and values hard honest work above everything else, to me, feels like. you take the one guy in the entire group that’s known to be working class, the only one who has to work to survive in a group of privileged students, and the first thing fandom says about this character is like ‘oh boy! he works so much. he loves working to survive, it’s so deeply intrinsic to his personality as to be his main traits. working fullfills him, it makes him happy’. idk. it feels a little like mocking the socioeconomic inequalities that force him to work himself to exhaustion everyday just to survive. especially when you ignore everything else we know about him, his enthusiasm for the outside world, his knowledge, his compassion and his passion for learning, etc. which are, btw, highlighted way more than the hard-working part in the actual text

This is a jar full of major characters Actually it is a jar full of chocolate covered raisins on top of a dirty TV tray. But pretend the raisins are interesting and well rounded fictional characters with significant roles in their stories.

We’re sharing these raisins at a party for Western Storytelling, so we get out two bowls. 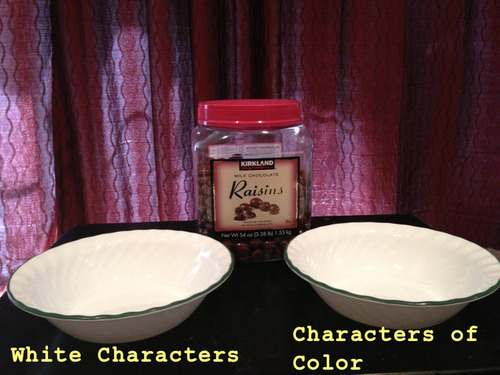 Then we start filling the bowls. And at first we only fill the one on the left. 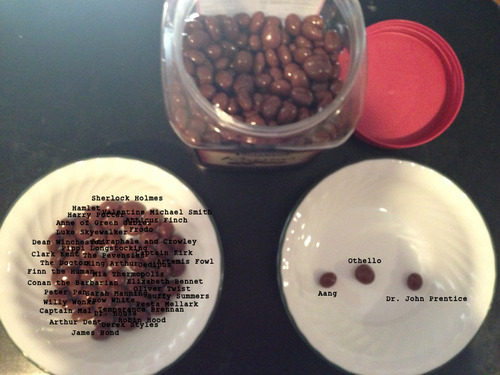 And the thing about these bowls is, they don’t ever reset. We don’t get to empty them and start over. While we might lose some raisins to lost records or the stories becoming unpopular, but we never get to just restart. So even when we start putting raisins in the bowl on the right, we’re still way behind from the bowl on the left. Until these are the bowls.

Now you get to move and distribute more raisins. You can add raisins or take away raisins entirely, or you can move them from one bowl to the other.

This is the bowl on the left. I might have changed the number of raisins from one picture to the next. Can you tell me, did I add or remove raisins? How many? Did I leave the number the same? You can’t tell for certain, can you? Adding or removing a raisin over here doesn’t seem to make much of a change to this bowl.

This is the bowl on the right. I might have changed the number of raisins from one picture to the next. Can you tell me, did I add or remove raisins? How many? Did I leave the number the same? 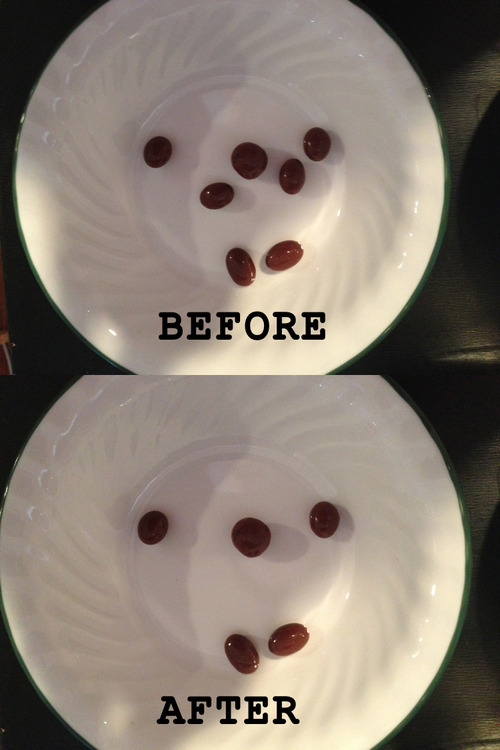 When there are so few raisins to start, any change made is really easy to spot, and makes a really significant difference.

The white characters bowl is already so full that any change in number is almost meaningless (and is bound to be undone in mere minutes anyway, with the amount of new story creation going on), while the characters of color bowl changes hugely with each addition or subtraction, and any subtraction is a major loss.

This is also something to take in consideration when creating new characters. When you create a white character you have already, by the context of the larger culture, created a character with at least one feature that is not going to make a difference to the narratives at large. But every time you create a new character of color, you are changing something in our world. 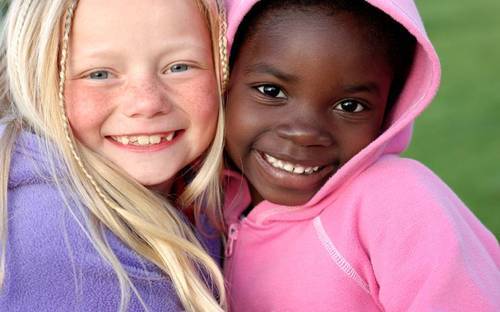 Oh my god they are adorable!

And they see their bowls But before you hand them out you look right into the little black girls’s eyes and take two of her seven raisins and put them in the little white girl’s bowl.

I think she’d be totally justified in crying or leaving and yelling at you. Because how could you do that to a little girl? You were already giving the white girl so much more, and her so little, why would you do that? How could you justify yourself?

But on the other hand if you took two raisins from the white girl’s bowl and moved them over to the black girl’s bowl and the white girl looked at her bowl still full to the brim and decided your moving those raisins was unfair and she stomped and cried and yelled, well then she is a spoiled and entitled brat.

And if you are adding new raisins, it seems more important to add them to the bowl on the right. I mean, even if we added the both bowls at the same speed from now on (and we don’t) it would still take a long time before the numbers got big enough to make the difference we’ve already established insignificant.

And that’s the difference between whitewashing POC characters and making previously white characters POC. And that’s why every time a character’s race is ambiguous and we make them white, we’ve lost an opportunity.

*goes off to eat her chocolate covered raisins, which are no longer metaphors just snacks*

1. Fist: Make a fist around the epi-pen, don’t place your thumb/fingers over either end

2. Flick the blue cap off

3. Fire. Press down into the outer thigh (the big muscle in there), hold for 10 seconds before removing (the orange cap will cover the needle). Bare skin is best but the epi-pen will go through clothing. Avoid pockets and seams.

– Ring an ambulance even if everything seems to be fine!

Oh my god.
So as someone who has to carry an epipen EVERYWHERE I am so happy to see that there’s an info post about them.
Like in the extreme case that I can’t inject myself, somebody else would have to do it, but nobody knows how to do it! Thank you, this may just save my life some day.

Don’t be wimpy about it, either. I know friends who are like, “but idk if I could stab you with a needle!” Please stab me with the needle, don’t be hesitant about it.

In my case (I can’t speak for all allergies), an epi buys me 20 minutes of breathing to get to the hospital. It is not a magic bullet, it’s a few critical minutes to help get me where I need to go.

For those who don’t know, people with serious food allergies carry epinephrine which is an adrenaline shot just in case they have anaphylaxis, which is a life threatening allergic attack. This shot is life-saving and must be administered to someone who is having an anaphylactic attack as SOON AS POSSIBLE, because an extra waited minute could mean their life.

It doesn’t hurt much at all to use this needle. The first time I used mine, I didn’t even feel it. But be sure to stab it IN THE OUTER THIGH. Do not stick it anywhere else or you could seriously hurt or kill someone. Just right to the outside of the thigh and then call the ambulance – even if your friend starts doing better, they could have a biphasic reaction, meaning a reaction that comes back (or they may need a second dose, be on the look out). If your friend has an epipen, then they have an epipen trainer that doesn’t have a needle and you can try it out just to be sure you know how to use the real thing if you have to. I’d also advise holding it a few more seconds then 10, maybe go for 14 just to be sure all the medicine is administered and that you didn’t count too fast – that’s what I did.

Here’s a graphic of where to stick it:

THANK YOU FOR THE GRAPHIC I was about to ask because my mom carries one around and so do some of my friends and I wanted to make sure I would do it right if I ever needed to!