My professor talked about how women aren’t used to asking for things in the work place, such as raises, because we’re conditioned to downplay our achievements and hold off on asserting our value. She discussed how, even now at this stage in her career (a published doctrate), she shakes when she askes to be considered for a raise and about the first time she was really successful at getting one. After class I asked her what she asked her boss and she winked at me, took me to her office, and asked me to take notes.

She said she practiced this technique like 5 times in her office before she requested a meeting with her boss. I’m gonna share it with you guys because I really loved it.

You start off by thanking your employer for their support (whatever that means in the context of your work environment).
You then say that you would like to take some time to discuss next year’s salary.
You say, allow me to refresh your memory regarding some of my accomplishments or contributions from the past year, and you present a written summary of all that you’ve done.
You close by saying, I hope that next year’s salary reflects this list of contributions and you thank them for their time and see yourself out.

I just loved how she made it seem so much less daunting of a task. She said not to underestimate your achievements as women have a tendency underreporting what they’ve done.

The fact that she shared this with me really meant a lot as well as women really need to be there to empower each other and help guide each other towards success. So if you end up using this, let me know! I want to see how it works for you ^_^.

I wanted my first-year film students to understand what happens to a story when actual human beings inhabit your characters, and the way they can inspire storytelling. And I wanted to teach them how to look at headshots and what you might be able to tell from a headshot. So for the past few years I’ve done a small experiment with them.

It works like this: I bring in my giant file of head shots, which include actors of all races, sizes, shapes, ages, and experience levels. Each student picks a head shot from the stack and gets a few minutes to sit with the person’s face and then make up a little story about them.

Namely, for white men, they have no trouble coming up with an entire history, job, role, genre, time, place, and costume. They will often identify him without prompting as “the main character.” The only exception? “He would play the gay guy.” For white women, they mostly do not come up with a job (even though it was specifically asked for), and they will identify her by her relationships. “She would play the mom/wife/love interest/best friend.” I’ve heard “She would play the slut” or “She would play the hot girl.” A lot more than once.

For nonwhite men, it can be equally depressing. “He’s in a buddy cop movie, but he’s not the main guy, he’s the partner.” “He’d play a terrorist.” “He’d play a drug dealer.” “A thug.” “A hustler.” “Homeless guy.” One Asian actor was promoted to “villain.”

For nonwhite women (grab onto something sturdy, like a big glass of strong liquor), sometimes they are “lucky” enough to be classified as the girlfriend/love interest/mom, but I have also heard things like “Well, she’d be in a romantic comedy, but as the friend, you know?” “Maid.” “Prostitute.” “Drug addict.”

I should point out that the responses are similar whether the group is all or mostly-white or extremely racially mixed, and all the groups I’ve tried this with have been about equally balanced between men and women, though individual responses vary. Women do a little better with women, and people of color do a little better with people of color, but female students sometimes forget to come up with a job for female actors and black male students sometimes tell the class that their black male actor wouldn’t be the main guy.

Once the students have made their pitches, we interrogate their opinions. “You seem really sure that he’s not the main character – why? What made you automatically say that?” “You said she was a mom. Was she born a mom, or did she maybe do something else with her life before her magic womb opened up and gave her an identity? Who is she as a person?” In the case of the “thug“, it turns out that the student was just reading off his film resume. This brilliant African American actor who regularly brings houses down doing Shakespeare on the stage and more than once made me weep at the beauty and subtlety of his performances, had a list of film credits that just said “Thug #4.” “Gang member.” “Muscle.” Because that’s the film work he can get. Because it puts food on his table.

So, the first time I did this exercise, I didn’t know that it would turn into a lesson on racism, sexism, and every other kind of -ism. I thought it was just about casting. But now I know that casting is never just about casting, and this day is a real teachable opportunity. Because if we do this right, we get to the really awkward silence, where the (now mortified) students try to sink into their chairs. Because, hey, most of them are proud Obama voters! They have been raised by feminist moms! They don’t want to be or see themselves as being racist or sexist. But their own racism and sexism is running amok in the room, and it’s awkward.

“…and by subsequent fandoms.“ <— bless this addition.

This one is always worth reblogging.
When I say, “Representation matters,” it’s not just the presence of PoC, women, PwD, LGBTQIA, in narrative, it’s the roles are those characters are occupying.

The hall of mirrors that is the interplay between fiction and real life becomes a negative feedback loop with real consequences, because we internalize things and then we act them out.

Storytelling is a powerful thing. What stories are we telling, and why?

How media clearly reflects the sexism and the racism we cannot see in ourselves.

tbh people mock harry for going back to rescue fleurs sister in the second triwizard task but harry knows dumbledore better than anyone else. he probably looked at the situation and thought “would dumbledore let an eight year old drown just because fleur couldnt do this bit? yes. yes he would.”

it’s also possible he was acting off of the lessons he learned in the abusive dursley household. that’s why he does a lot of his so-called “hero complex” shit. he takes a lot of personal responsibility for other people bc he learned growing up that “no one’s here for you, no one will help you, you will not catch any breaks”. he helps bc if he didn’t, who would? certainly not the dursleys, and that’s what he grew up with.

he does things by himself and the two people he actually trusts, bc he’s learned that authority figures are no help and will only make things worse. he takes situations at face value bc he’s never seen other options in his life, he’s never HAD other options in his life. speaking very personally, that was a serious marker of abuse that i saw in myself – i never thought abt escape, or what i could do to improve my situation, bc i didn’t even see that as an option. the options were survive or don’t, deal w it or don’t, acclimate or implode.

maybe he wasn’t thinking abt what DUMBLEDORE would do, what anyone at hogwarts would do. maybe he was acting off what he knew the dursleys (his main authority figures) would do. the dursleys would let the girl drown. and harry was there, and harry could do something, and so harry did. he took personal responsibility for fleur’s sister’s safety bc all his life he’s learned that authority figures cannot be trusted to do so.

people characterize these aspects of harry as a “hero complex” or a “stupid nobility” or a “lack of common sense”, but i don’t agree with that. i can’t put my finger on exactly what it is. it’s not completely unhealthy; it’s even very useful and responsible on occasion.

it’s called “complex ptsd” and if you get out of the abusive situation before you’re old enough to understand how fucked up it was, like Harry did, you don’t end up with the classic flashbacks so much, just atypical behavior patterns and a high risk of other shit. That’s why Harry is so fucked up by everything that Umbridge does, it’s because he’s being retraumatized in his safe space.

A masterpost type of thing

i mean just look at them 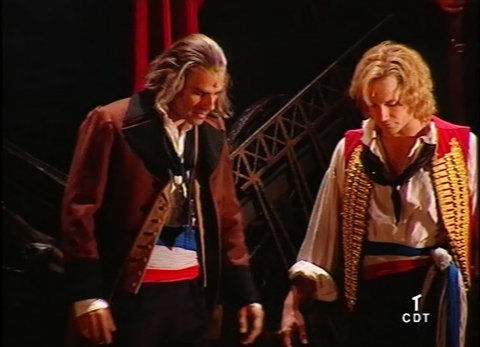 if could your wounds with lots of cuddles… reblogging for SO MANY REASONS but also because that one scene of Javert and Enjolras both looking like they’re trying to figure out what the heck that thing on the ground is, that makes me happy all out of context.