Yessssssssssss.  ^____________^  OK, so we’ve discussed this many times before but Enjolras/Feuilly is definitely a ‘10′ ship for me (maybe an ‘11′ by now?  XD).  ^_^  They’re just too adorable because they respect and admire each other SO MUCH and can you imagine how good they’d be for each other?  I mean, they both suck at self-care because they get too wrapped up in their causes, but they’d be SO GOOD at taking care of each other.  *_*

But it took them a long time to get there.

They have such a slow courtship.  Seriously.  SO. SLOW.

When they first met, Feuilly was very closed off emotionally.  He was passionate, sure, but he didn’t open up about himself much.  He was quick to take up a cause, but slow to let anyone else in.  He’d lost too much in his life and he’d been hurt too often and it had turned him shy of making new friendships.  And he’d been so focused on getting out and doing better for himself that romance just never seemed to be in the cards.

Enjolras, OTOH, was an open book… he’d just never really thought about dating much.
There were always other things
which took precedence – school, friends, injustice.  Who had time for
romance, right?

If pressed he’d have
said that he was asexual and aromantic, since a history of a lack of interest must mean something, right?

(More behind the cut because this is getting long and turning into a mini-fic, good grief. O_o;;;)

When Enjolras and Feuilly first meet, they admire each other from a distance.  Feuilly respects Enjolras, looks up to him as a leader and upperclassman, but he’s learned that someone who looks that good from a distance hardly ever is from close up.  So, he’s afraid to get too close, even if he can’t deny that there’s something compelling about Enjolras, especially when he’s all riled up from speechmaking.

As for Enjolras, he’s absolutely floored by Feuilly’s passion and his willingness to do whatever it takes to help out, no matter how much else he has on his plate.  But every time he tries to talk to him, he ends up tripping over his tongue in the worst possible ways.  (Seriously, it’s SO PAINFULLY AWKWARD – think Shang in Mulan “…you fight good.” level of awkward.  SO. AWKWARD.)  Every bit of his eloquence deserts him.

What Enjolras doesn’t know, however, is that every single time he trips over himself trying to talk to Feuilly… Feuilly gets that much more comfortable around him.  Because, hey look, he’s not perfect.  He messes up.  He blushes.  One time he even squeaked, he was so embarrassed.  (Combeferre heard about that one in great detail later.  From both of them.  And both had their faces buried in their hands when they relayed the story, and related it in equally high pitched tones… just for entirely different reasons.  He found it hilarious.)

It takes them over a year before they can manage a full conversation that consists of more than “Hello!” and “Great speech!” and “OK, bye!”  But once that ice is broken, it is BROKEN.  They find that they more interests in common than they ever would have guessed.  They eventually start staying after meetings for hours, often closing out the bar in their zeal for conversation.  Two years after their first meeting, they’re as comfortable with each other as it’s possible for two people to be with each other.  They’re each other’s first phone call when they’re in trouble, or when they have good news, or when they’re upset… or when they wake up in the morning.

And Enjolras, who never had time or interest in romance or sex, and Feuilly who was too angry and bitter to even contemplate it… find their opinions changing.  Glances linger just a little longer.  Touches become a little more intimate.  Smiles soften just a hair.  And five years after their first meeting when people start assuming that they’re dating… they simply smile and don’t bother to correct them. 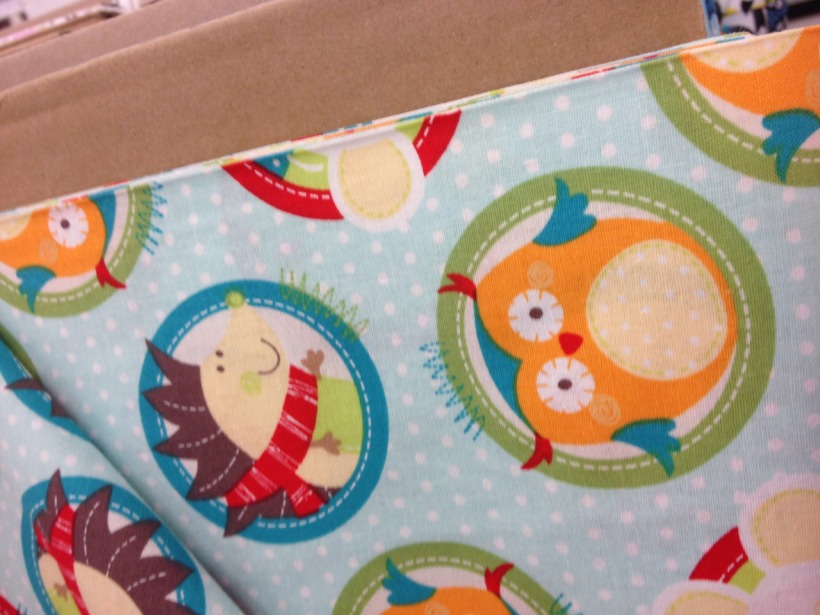 @thecoffeetragedy I saw this at the fabric store, and thought of you.

honestly I think the best would be keeping ace amis week, because it sounds good and brand recognition, and be sure to mention aro headcanon/fics are encouraged too? it’s not perfect but. nothing is, I guess 😦

Yeah, I think that’s the option I’m leaning towards.  It makes the most sense and would hopefully cause the least confusion.  And honestly, I’m not sure the fandom is “big enough,” so to speak, to support an ace amis week AND an aro amis week.  And the two often overlap, so separating them out is kind of hard.

(They didn’t actually have the hedgie mold or I’d have taken a picture of it, too, but look how cute!!!  XDDD)

❤ ❤ somehow it gave me the mental image/headcanon of jehan as a busker – playing the harp or lyre or something like that – around sunset near the river, sitting on a little rug and smiling to everyone that passes by ahhh

OMGGGGG.  YES.  YES, I COULD TOTALLY SEE THAT.  I’d actually been looking for a picture of a wooden flute to put in there (because he canonically plays the flute), but I couldn’t find one I liked.  But YES, I love this idea so much.  And he’d take requests, I’m sure, from everyone who comes down to hang out by the river, be they couples or families or groups of friends.  And his taste in music is as eclectic as his wardrobe, so no one’s been been able to stump him with a request yet.  Whether it’s the Reading Rainbow theme song, Jupiter from The Planets, Seasons of Love from Rent, or something from Led Zeppelin (and you haven’t lived until you’ve heard him play Stairway to Heaven on the harp), he seems to know every song there is to know and he takes great pride in being able to pleasantly surprise people by knowing their favorite song.

People do research trying to stump him.  They bet him that he won’t know the song they’re asking for and he makes a pretty penny on the side from the action – though he’s as likely to bet you a flower crown as he is real money, especially if you’re a kid.  To this day, only one person has been able to stump him with a request and it was a three year old girl asking for the theme song to Dora the Explorer and he felt so awful that he didn’t know it that he ended up frantically calling around to his friends to ask if anyone could find him sheet music.

Feuilly went him one better.  He showed up with his guitar and played it himself.  The little girl was delighted and now once every few weeks, Feuilly joins him at the river and they play duets.  ^_^

@thecoffeetragedy
reblogged your photoset “Les Mis Modern Aesthetic, Jean Prouvaire He loved to saunter through fields of wild oats and corn-flowers, and busied…”

#eee!!#one of my favourite jehan faceclaims!#:D#les mis#jean prouvaire#i love this a lot it’s very warm and sweet and v jehan 😀

@thecoffeetragedy
reblogged your photoset “Les Mis Modern Aesthetic, Feuilly It takes them a while to get their garden started, between moving and
Feuilly…”

Just got home from therapy to see these tags and well… you know you’ve done good when you reduce a friend to squeeing.  ^_^  Thank you!!  *big hugs*  I’m really glad you liked it!  😀

On a more serious note, IF YOU HAVE NOT SEEN ANY OF VE’S POSTS ABOUT THEIR COUNTRY HOUSE AU, I WOULD HIGHLY RECOMMEND LOOKING INTO IT.  I LOVE THESE ‘VERSE SO SO MUCH.  ^_______^

@thecoffeetragedy
replied to your photoset “Les Amis Modern Aesthetic, Feuilly Feuilly was a workingman, a…”

YAY!  😀  Feuilly just always has this autumn/vintage/warm sepia tone feel to me, you know?  And I know we’ve discussed how he’s like… the personification of autumn coziness before, so…  basically that’s what I was going for.  ^_^  I’m glad you like it!
^_____^

Feuilly was a workingman, a fan-maker, orphaned both of father and mother, who earned with difficulty three francs a day, and had but one thought, to deliver the world. He had one other preoccupation, to educate himself; he called this also, delivering himself. He had taught himself to read and write; everything that he knew, he had learned by himself. Feuilly had a generous heart. The range of his embrace was immense. This orphan had adopted the peoples.