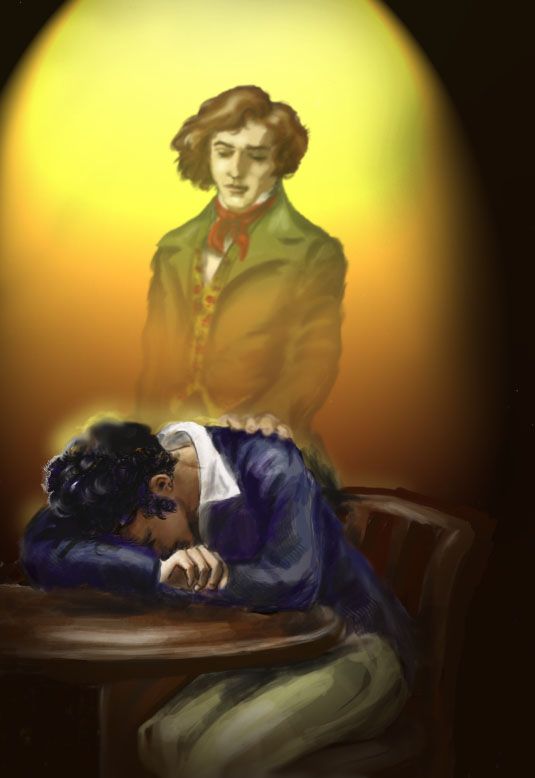 Okay…I’m still fiddling with all the lighting effects and this is a rush job of a couple of hours, but fwiw…

Forgotten this one! But yes, Marius and Courfeyrac.

Reblog from long ago.

Brick vs Movie: Chapter V. End of the Verses of Jean Prouvaire

I am this boy
who hears the closeness of the words
worrier and warrior
all the while knowing
it’s you who have made me
both of those things.   (x)

“I never claimed to be the Chosen One. That was Qui-Gon. Even the Council doesn’t believe it anymore, so why should you?”

“Because I think you believe it,” Obi-Wan said calmly. “I think you know in your heart that you’re meant for something extraordinary.”

“And you, Master. What does your heart tell you you’re meant for?”

What’s been cracking me up/punching me in the chest about that post about Grantaire’s reaction to his crush sending a message to someone not him is  that that message wasn’t just to some random not-him person; it was to Bossuet.  Bossuet, who’s probably Grantaire’s  best friend along with Joly, and who’s definitely the most like Grantaire in personality among the Amis– sarcastic, chatty, down for a whole lot of hangin’ out doing Nothing Much; a smart,fun guy with a good heart, but not some impossible ideal.

But Bossuet’s also a serious, committed revolutionary, serious enough that Enjolras relies on him and sends him messages and keeps track of where he might be because he’s counting on him. People depend on Legle, goofy, broke, busted-coat  boots-joke Bossuet, because he can actually be depended on; he’s made himself that person. But he’s still also very much Grantaire’s goofy slacker drinking buddy; the one doesn’t rule out the other.

So Bossuet getting that note in front of Grantaire isn’t just Someone Not Him getting a note from the guy Grantaire’s kinda  super fixated on; it’s not even a case of “ my crush and my best friend, oh no”. It’s pretty much a great big banner announcement with trumpets that what Grantaire wants so much–to be someone useful, to be part of that faith and that effort, the sort of person that someone like Enjolras would rely on– isn’t such an impossible goal. It isn’t something barred to People Like  Grantaire, because Bossuet very much IS People Like Grantaire. It’s just something that Grantaire himself, for reasons he doesn’t even understand, hasn’t managed to make himself do.

Add in the issue that Grantaire’s already been obliquely lamenting about–that literally all his best friends are about to go do something that could very easily get them all killed, and he, again, really doesn’t yet understand why on an emotional level– and, holy cats, Bossuet  and Joly are still able to lead him back to cheerfulness, because they really are that good and that close with each other, and aghhh y’all I have so many feelings about this friendship and now I’m upset again because of a joke post.

Ouch, you got me right in the Lesgle feels!