ugh how the fuck do you cover letter

Greetings, Exalted One. Allow me to introduce myself. I am Luke Skywalker, Jedi Knight and friend to Captain Solo.

I know that you are powerful, mighty Jabba, and that your anger with Solo must be equally powerful. I seek an audience with Your Greatness to bargain for Solo’s life.

With your wisdom, I’m sure that we can work out an arrangement which will be mutually beneficial and enable us to avoid any unpleasant confrontation.

As a token of my goodwill, I present to you a gift: these two droids. Both are hardworking and will serve you well.

I will tell you where I thought I (Luke Skywalker) came in.

there’s all these aus about vader finding luke and smuggling him away to the empire in a clever moment of mental clarity, but please consider this crack au: after being faced with slavery, his mother’s death, tusken raiders, sand, obi-wan kenobi, seeing the larses, and tatooine in general, vader lays eyes on toddler luke skywalker – his son, which meant palpatine lied, holy fuck i’m a father, oh god padme i’m so sorry – and flips.

this is the straw that breaks the semi-rational sith lord’s back. in true anakin skywalker fashion, vader panics, scoops his son into his arms, charges into mos espa and turns it upside down, steals a shuttle from his own fleet, slams random hyperspace coordinates, and is thrown into space with no real idea where he’s going or when he’s going to get there. with a toddler.

to make things more interesting, obi-wan snuck aboard the ship, but dropped his lightsaber in the ruckus of sneaking into imperial ranks. and poor, poor firmus piett, a lowly officer who just so happened to be in the wrong place at the wrong time, runs smack into him.

and they’re all stuck on a ship, indefinitely. with a toddler.

just vader, picking up toddler luke under his arm like a football, and RUNNING LIKE FUCKING HELL

[darth vader voice] I HAVE YOU NOW

i love that people are contributing this is AMAZING

vader hefts the child into his arms – YOU CAN’T HAVE HIM – and literally turns away from everyone else like a kid with a new mcdonald’s toy. you can’t have him, YOU CAN’T EVEN LOOK AT HIM. luke quiets down because he’s up so high and he can see EVERYTHING and it’s fascinating. luke’s an easily impressed kid, after all. (and there are vents up here that he can nearly reach to crawl through!)

What if at one point Obi-wan and Vader get all huffy and refuse to speak to each other and Piett has to act as the go between.

vader: tell that washed up old man that i know exactly what i’m doing

piett: excuse me, master jedi, but lord vader has everything under control

obi-wan: [huffs] That walking disaster hasn’t had anything under control since he was nine, and you can tell him i said that. In fact, i insist

piett: [looks into the camera like on the office]

oh god i have to write this now. you’ve convinced me, I AM SOLD. THERE IS ALMOST NOTHING BETTER THAN THIS IMAGE.

imagine it gets to the point where vader and obi-wan are screaming at each other with piett stuck in the middle, and luke, his attention torn away from the pretty lights on vader’s chest, clambers up and pats vader right over the respirator. “stop,” luke, a 2 year old, orders, patting sith lord darth vader gently on the face. “is mean,” announces luke.

luke clambers off vader and toddles to piett to give him the biggest hug. “i sowwy,” says luke, solemnly. piett is about to faint. first lord vader, now the lordling? this is Too Much. vader’s probably giving piett the most terrifying death glare from behind his mask.

with the blessing of the Great and Powerful Luke Skywalker, piett can DEMAND THESE TWO STOP BEING CHILDREN but quietly, with a lot of respect.

obi-wan, meanwhile: i need a drink. i need a whole liquor bottle

I need to draw this

I said I would.

I THINK I’VE DIED AND ASCENDED TO HEAVEN 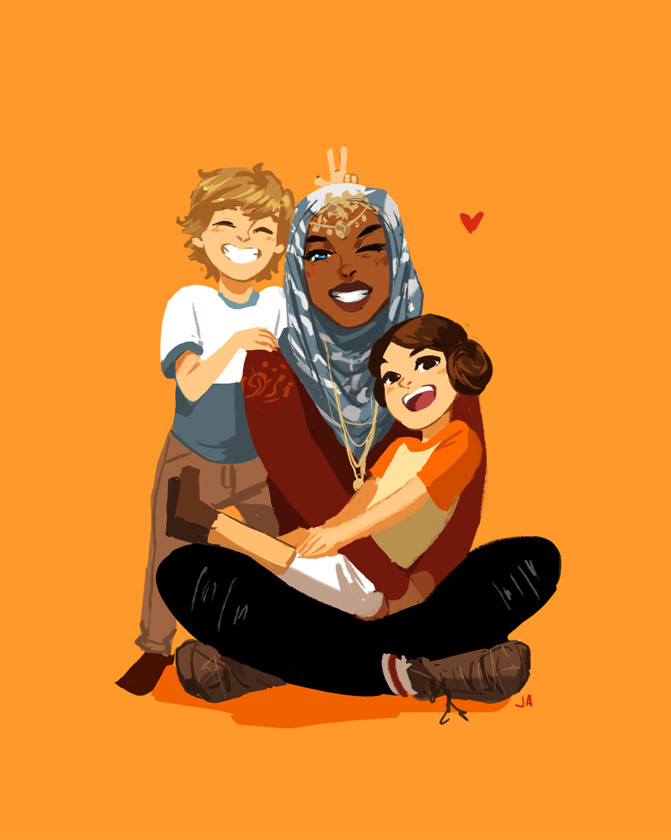 modern au ahsoka and the twins ✨

and we walk in fire like every riot • the one where padmé lives to continue the fight for democracy, luke and leia grow up with rebel bases for playgrounds, and anakin becomes the freedom fighter he had always meant to be.